"THE EDGE OF HEAVEN" has been re-released with additional bonus tracks on Knitting Factory Records, distributed by Sony/Red!!

Coming out of Shanghai originally between the wars, this fascinating (and little known in the West) musical genre combined elements of Western swing and jazz and Tin Pan Alley pop styles with Chinese influences, and was extremely popular in 1930s and 40s China.

And it lives again in China today, where it is undergoing a resurgence of interest—featured on the soundtrack to films like Zhang Yimou's "Shanghai Triad" and Wong Kar-Wai's "In the Mood for Love"...rearranged and remixed for clubs with dance beats...and rediscovered and re-recorded by current popular Chinese singers.

Guitarist extraordinaire/composer/songwriter Gary Lucas, called "The Thinking Man's Guitar Hero" in The New Yorker, arranged many of these classic songs for his album as solo acoustic instrumentals.

Read a re-appreciation of Gary's landmark 30's Chinese pop album "The Edge of Heaven" by the Wall Street Journal's chief pop critic Jim Fusilli on 12/22/15 on the Re: New Music website.

A Pick in the Village Voice

A Pick in Time Out New York

A Preview in the Chinese World Journal, Singtao Daily, and the China Press

Clips from the world premiere of Gary Lucas' expanded concert version of "The Edge of Heaven" live in Amsterdam's BimHuis 6/10/11 can be viewed here courtesy Paul Berkholst, and photos from the BimHuis show taken by Andrew Bull can be seen on Facebook here.

Gary made his mainland China performing debut during Shanghai World Expo 2010 at the Chinatown Shanghai Club in Shanghai, China on Thursday August 5th, playing a solo concert concert featuring songs from his "Edge of Heaven" album with special guest vocalist Sally Kwok. Check out the press release and the poster!

Recent links of Gary's recent mainland China debut, from Shanghai Today.com:
An interview with Dr. Robert Lai about Gary's " Edge of Heaven" project, plus performance clips from the show with vocalist Sally Kwok at Chinatown Shanghai club 8/5/2010 here, and also photos from the night here. 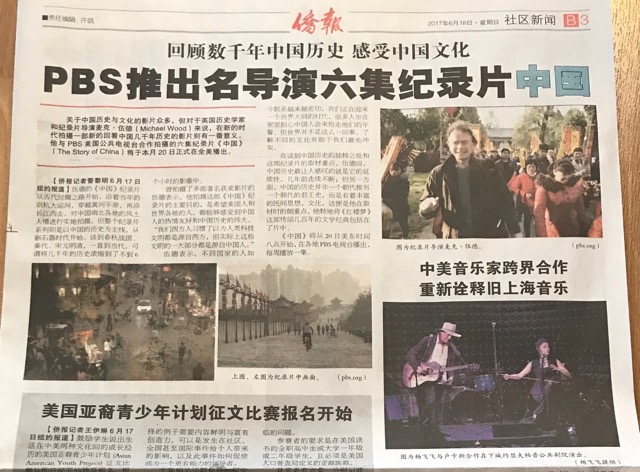 
"Tell Me", "A Tale of the Mah-Jong Game", and "The New Pair of Flowers" featuring Sally Kwok and Mo Hai Jin from the "The Edge of Heaven" project live at the Nijmegen Music Meeting Festival 6/11/11


A highlight of Gary's performing debut in mainland China—Bai Kwong's "If I'm Without You", sung by Sally Kwok at the Chinatown Shanghai Club 8/5/10

Check out a YouTube clip of Gary performing "The Mad World"...and check out Gods and Monsters with Gisburg live performing "Please Allow Me to Look at You Again"...and Gary performing "Where is My Home" solo...all featured on "The Edge of Heaven".

Gary also recorded many of these songs with various female vocalists, singing in the original Mandarin.

listen to mp3s of:

All taken from The Edge of Heaven, which to date has sold over 10,000 copies internationally and was profiled in the Wall Street Journal.

The album also received rave reviews around the world—topping the World Music Charts in Canada, and making many Best of the Year lists (including the French newspaper Liberation)...received 4 star reviews in Rolling Stone, fRoots, Vibrations, and Global Rhythms...was extensively praised in the Chinese press in Taiwan, Hong Kong (including the Hong Kong Music Bi-Weekly) and Macau....and was profiled in the International Herald Tribune and on NPR:

listen to the NPR feature here,

and check out the Press Raves here.

You can order this stunning album here.

"A Pair of Flowers" 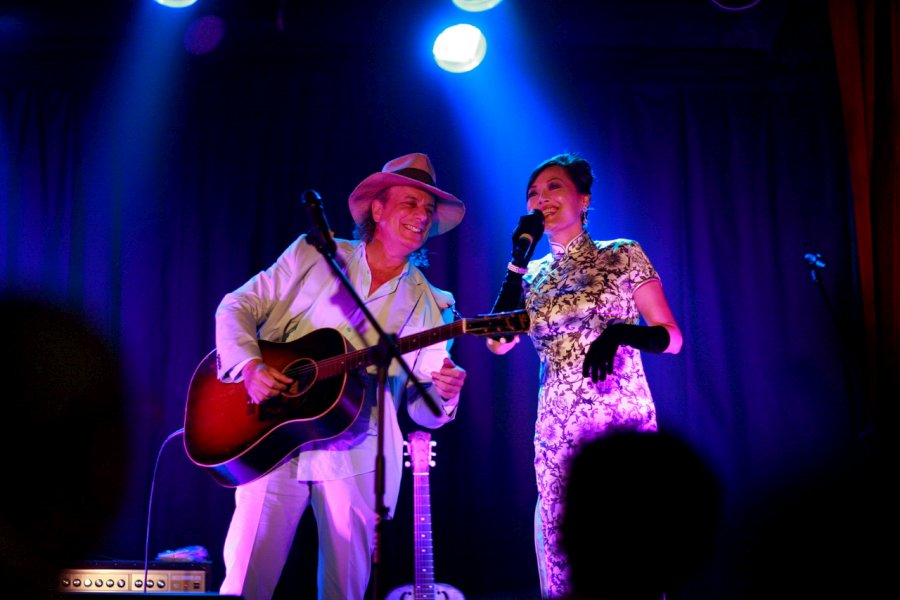 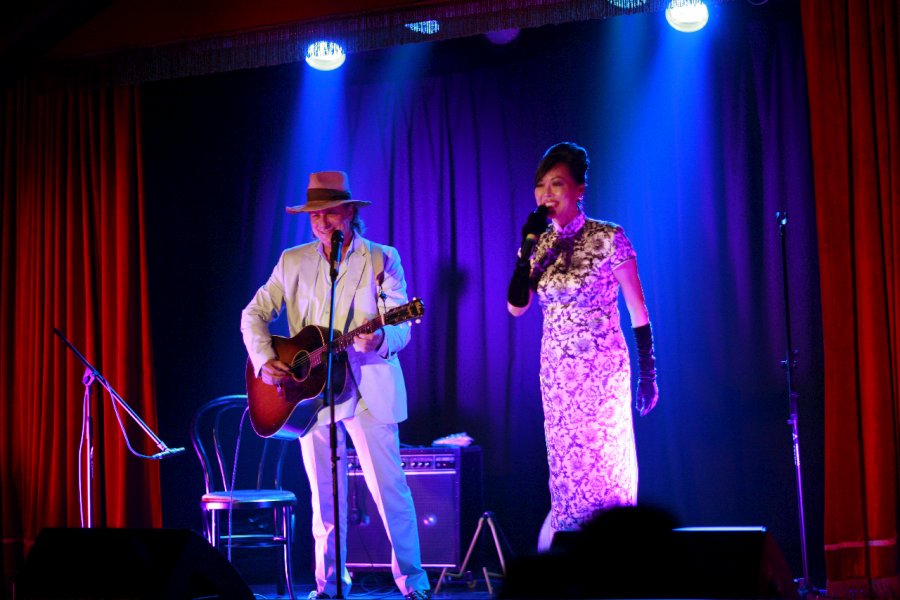 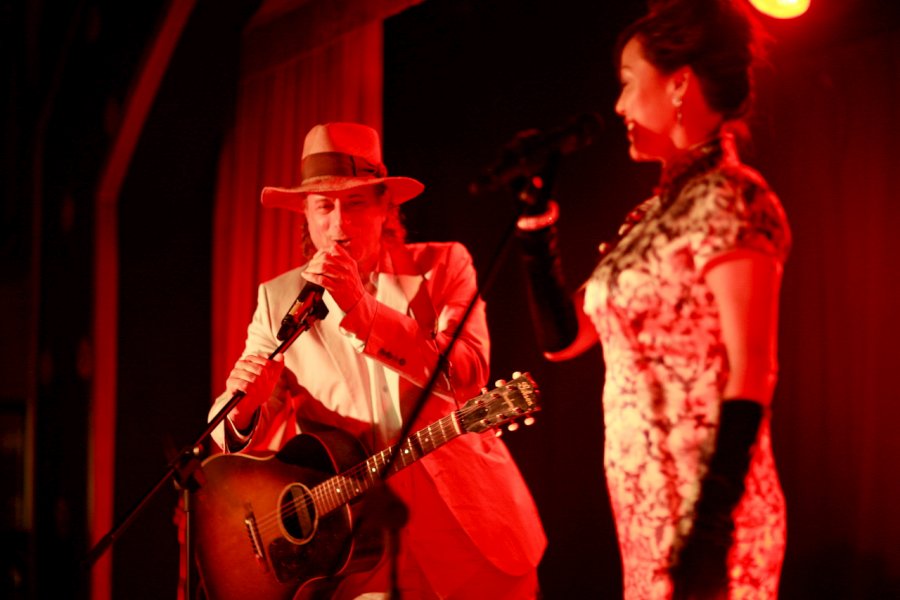 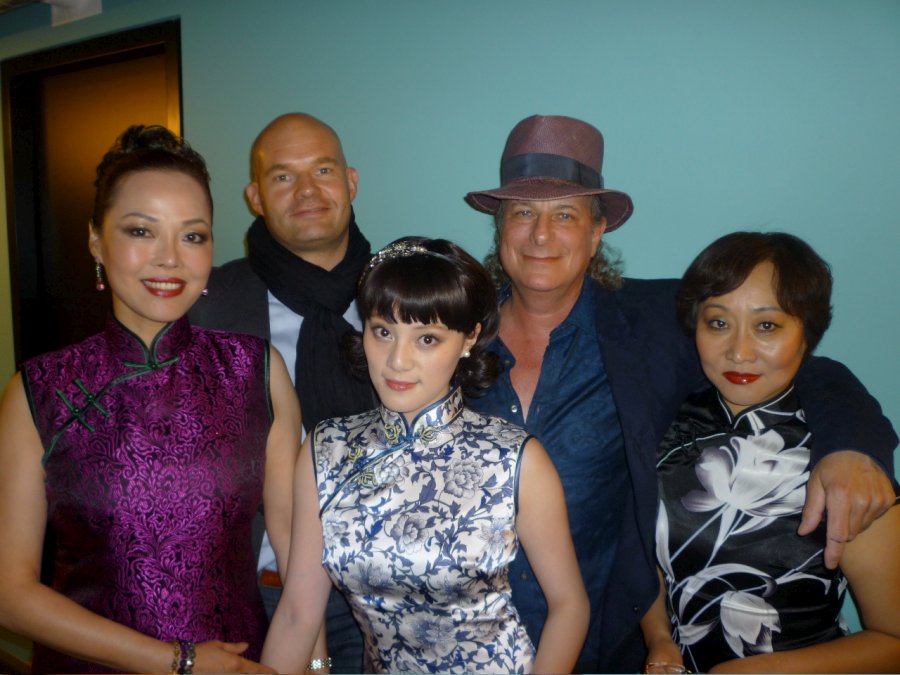 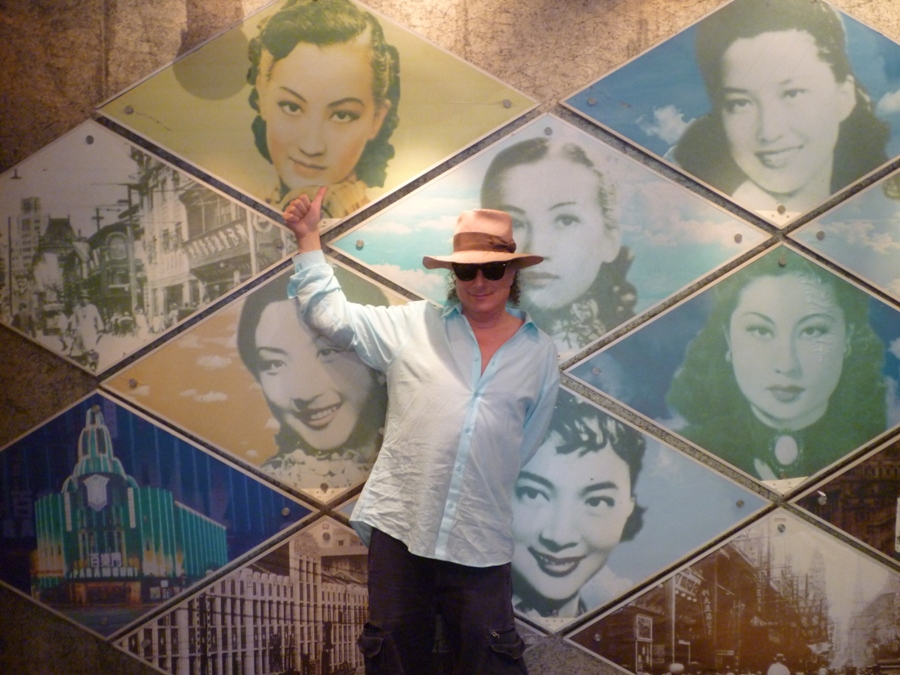 Gary Lucas at the original Paramount Ballroom in Shanghai pointing to a photo of Chow Hsuan, one of the 30's Shanghai divas saluted in "The Edge of Heaven" project—the ballroom was home to 30's Chinese pop and is still standing
photo by Sally Kwok 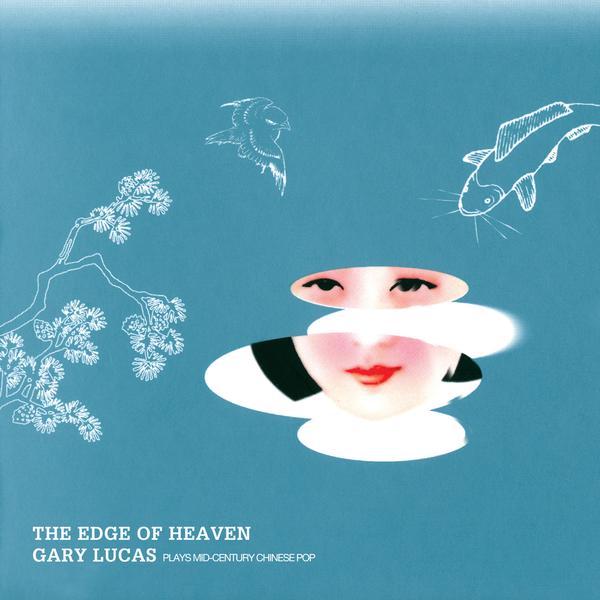 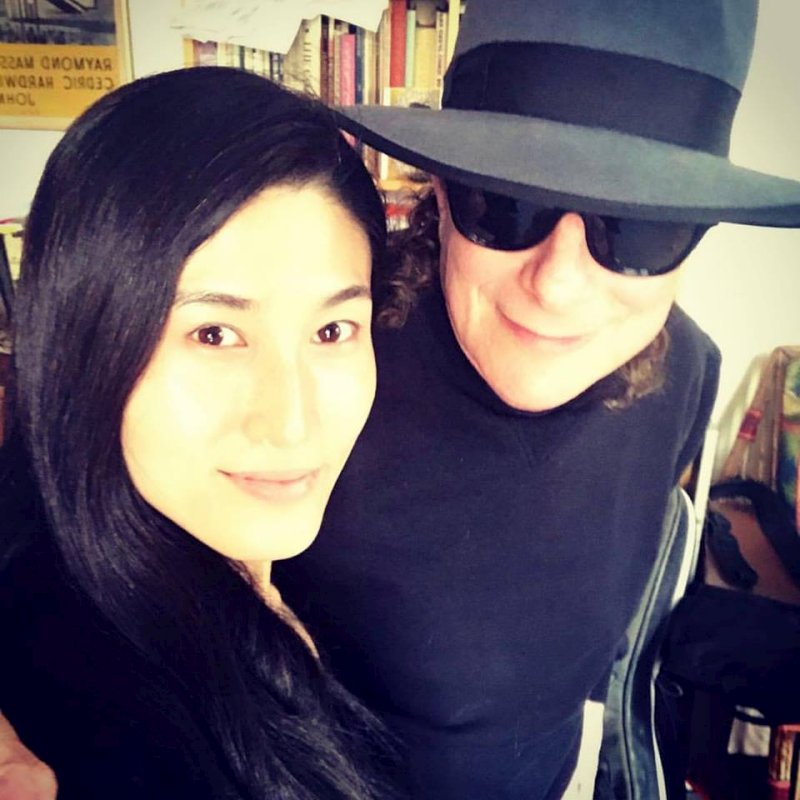 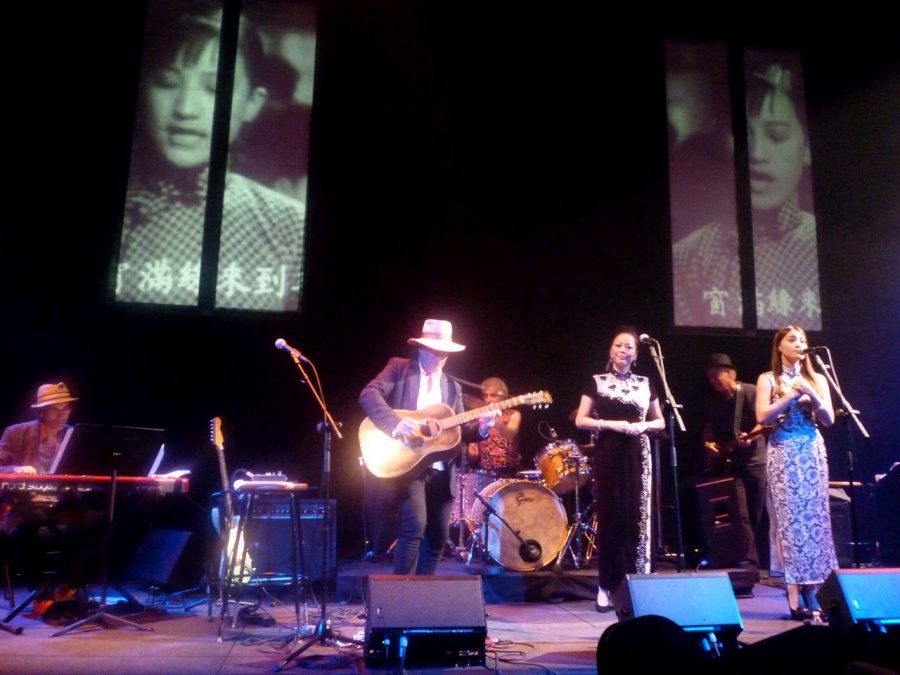 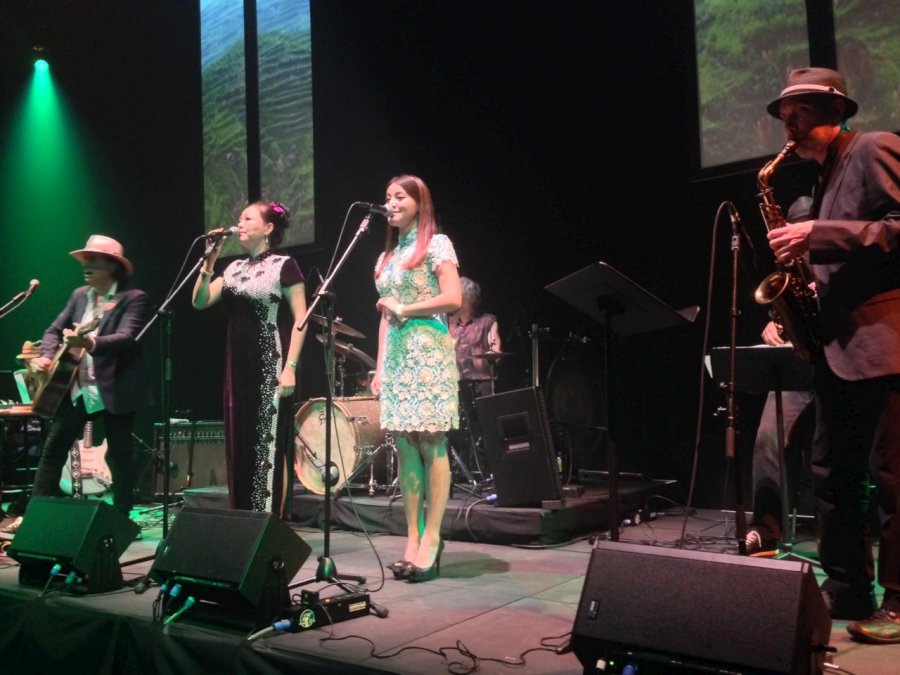 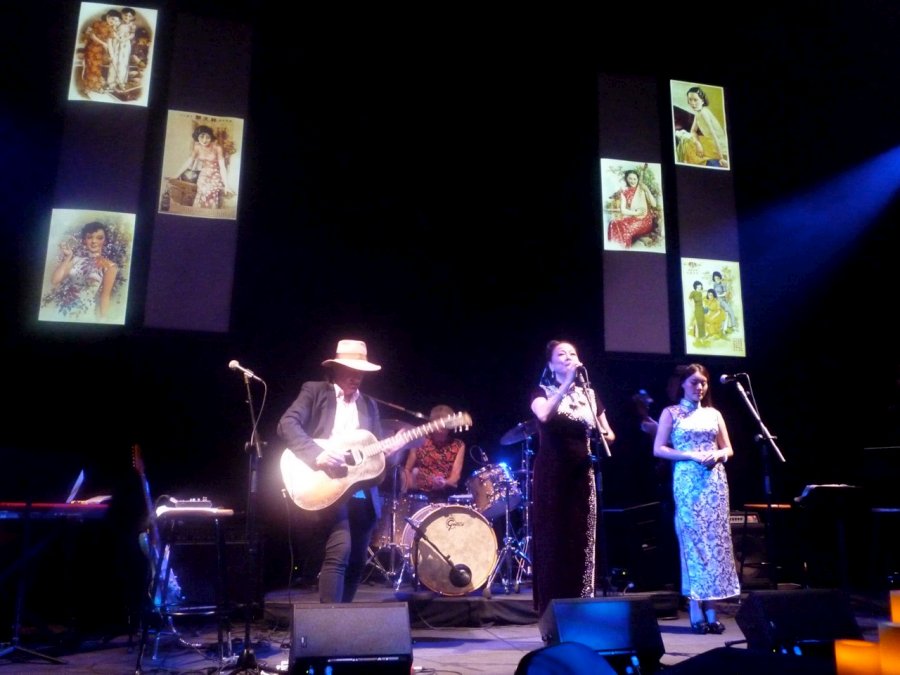 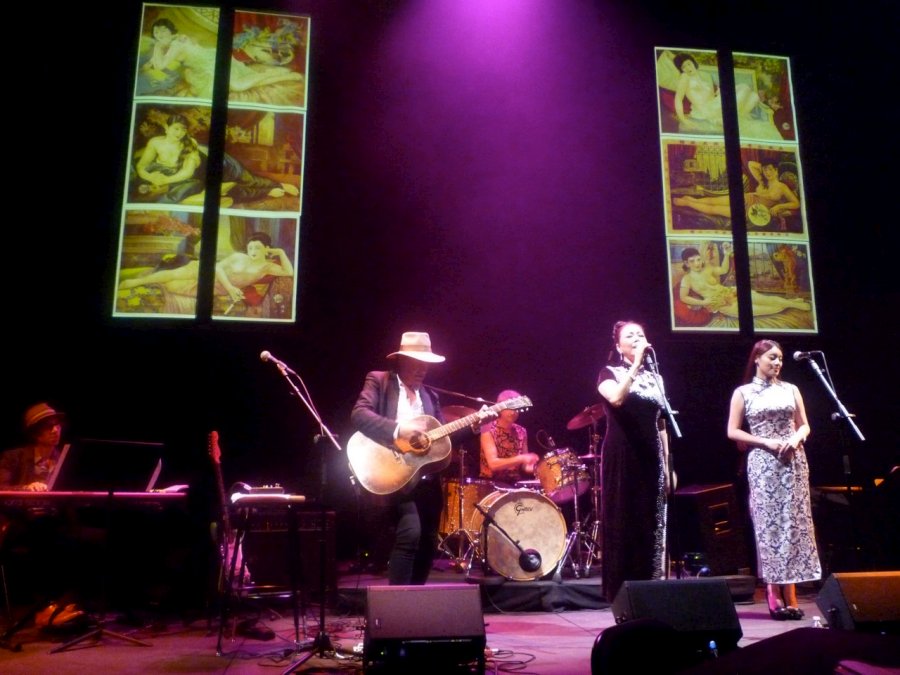 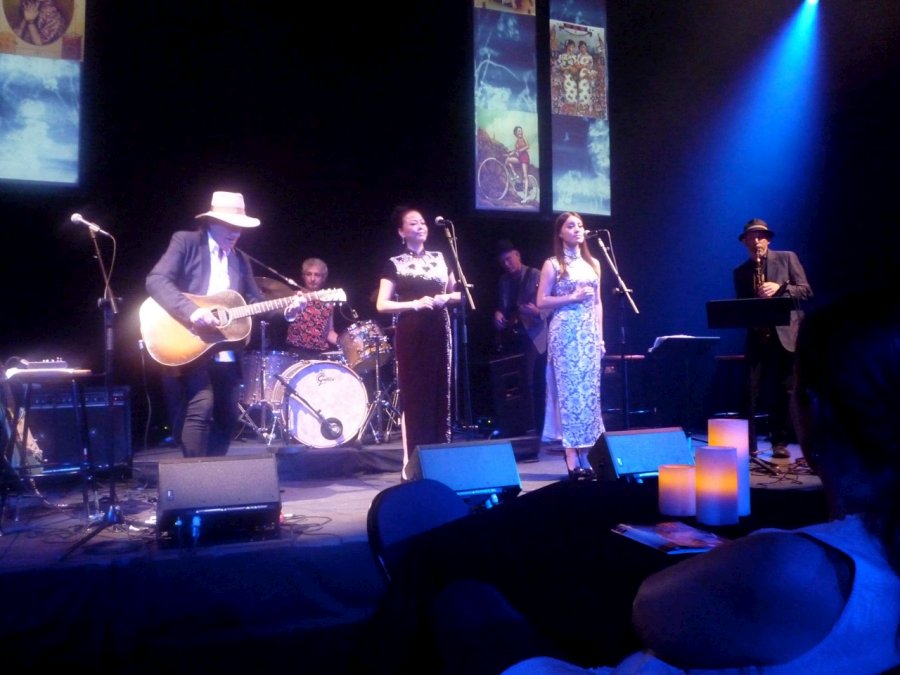 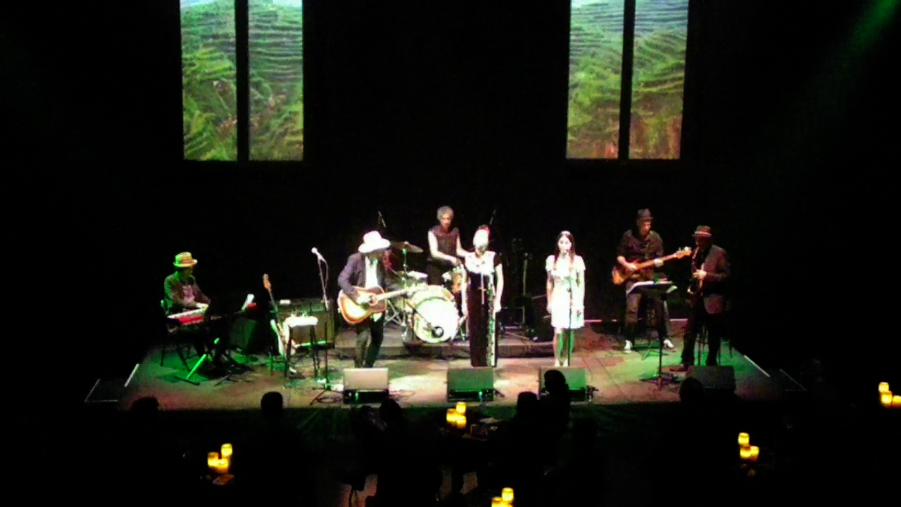 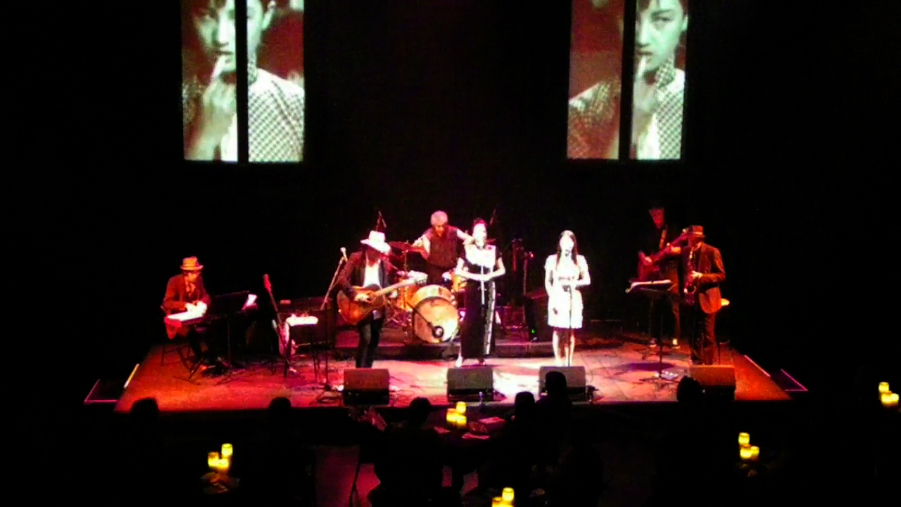 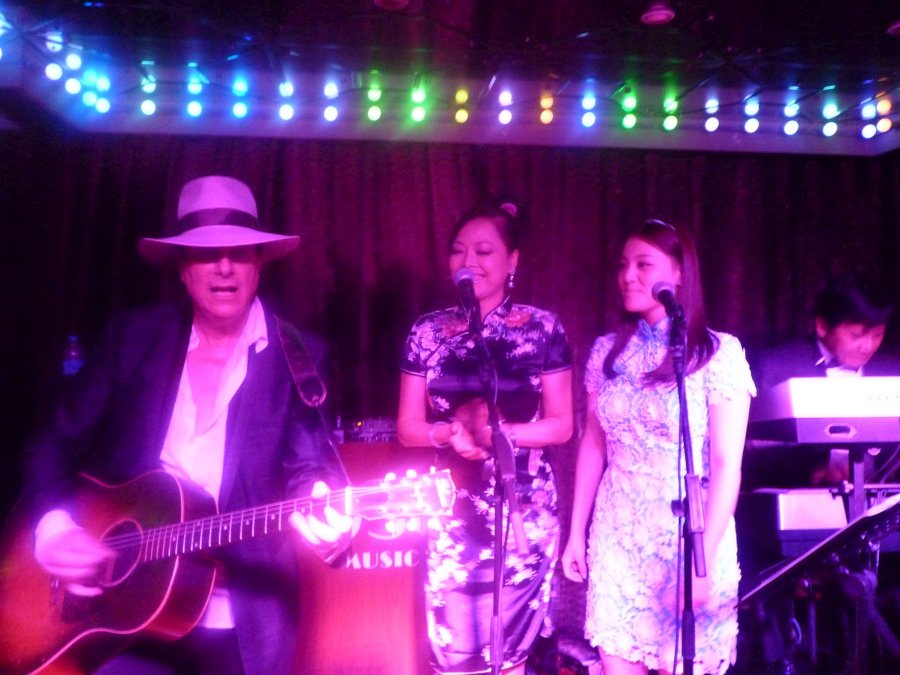 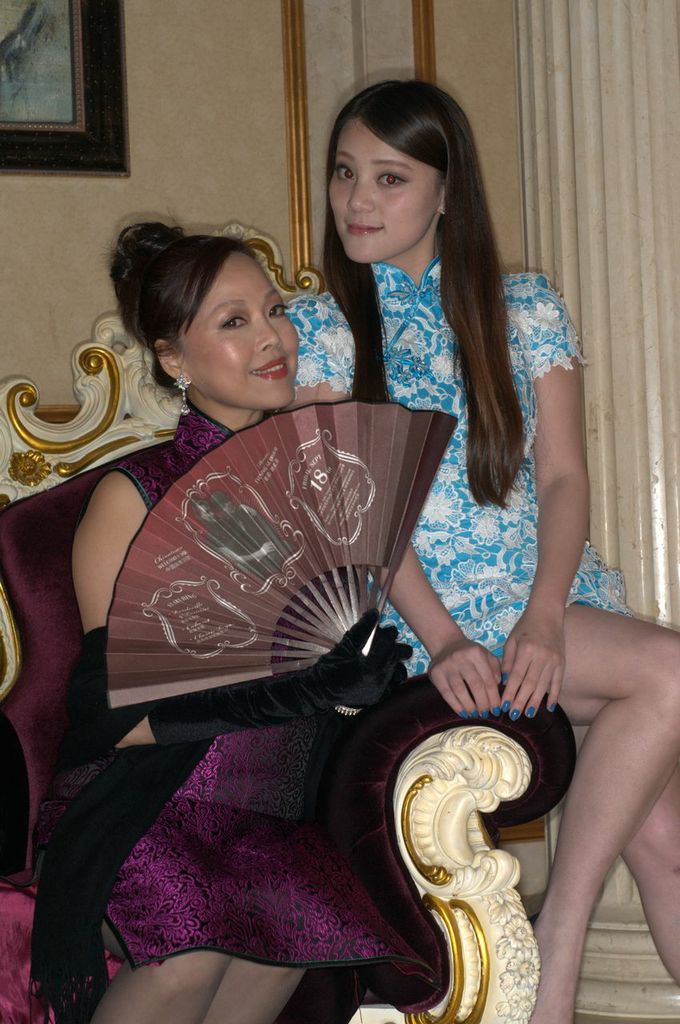 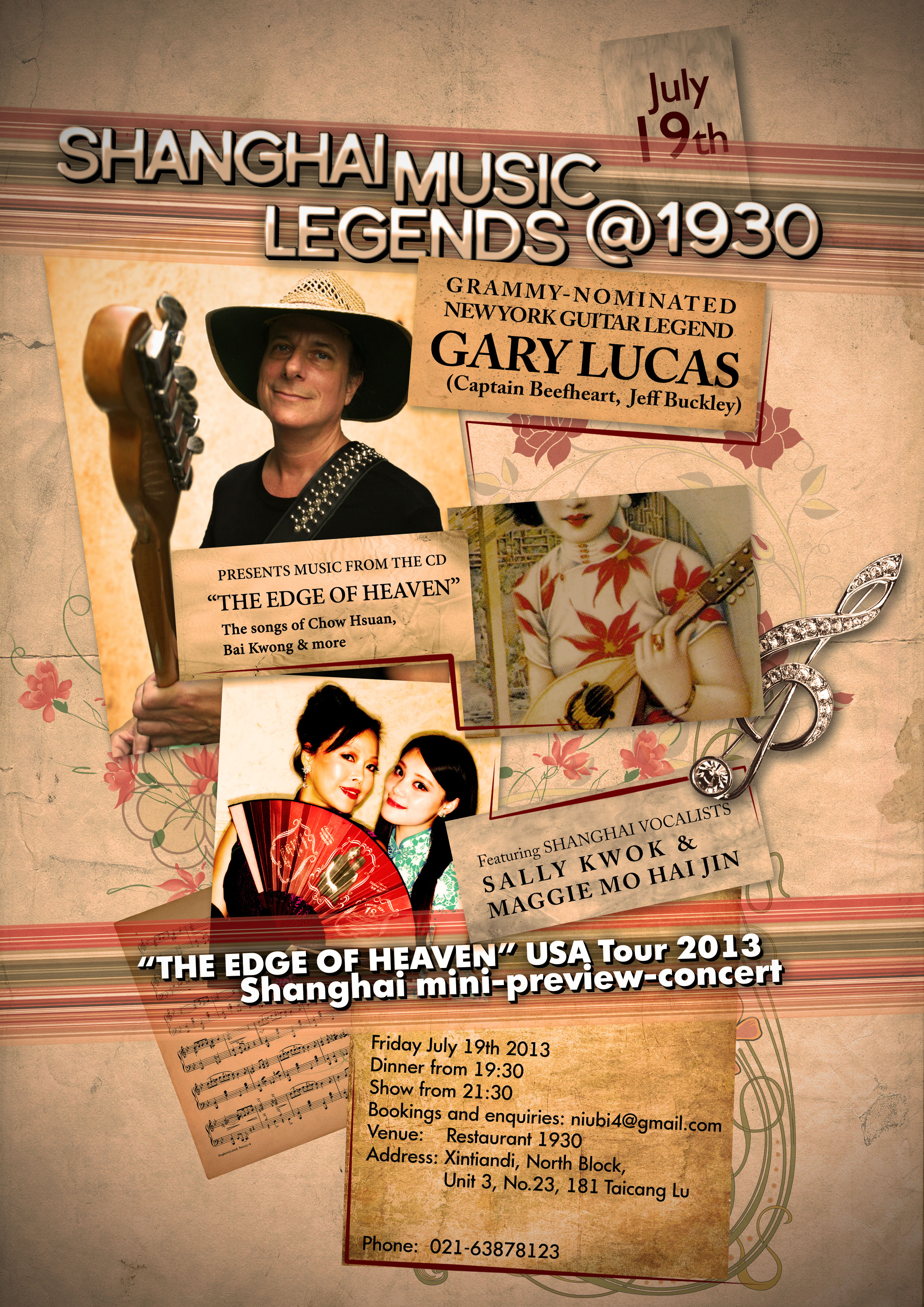 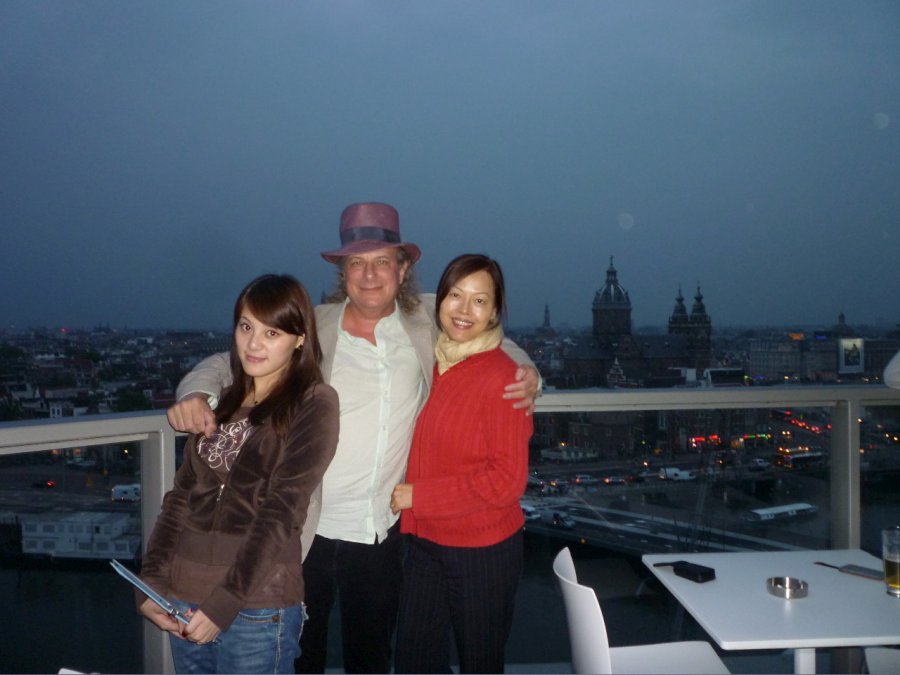 Gary Lucas with Mo Hai Jin and Sally Kwok before the world premiere of the new expanded concert version of "The Edge of Heaven" at the Holland Festival, 6/11 Amsterdam